Get notifications of new posts by email:

Cofounder and CTO of Leverate since 2008. Blogging about NetMQ and distributed computing with .Net.

C# is an amazing language which get improved with every version and now .Net become portable which is even more amazing. However there are still some features I'm missing or problems I want to see solved.

IDisposable interface and using statement are problematic, I really think it is the second biggest design flaw in C# (after events, the cause of all memory leaks).

Some of the issues:

Actually the Dispose method is optional, because usually with resource class all resources will be released automatically because of the scope keyword.

So as you see we don't even need to implement the Dispose method, because all resources will be disposed automatically when the scope will exit. The important role of the resource keyword is to make sure a compilation error will happen if resource class is used without scope or using. Bottom line this saves bugs, memory leaks, writing dispose method and code is cleaner (no unnecessary indent).

It is hard to write high performance or concurrent systems with C# and .Net, I know this from first experience, even async and await doesn't really solve the problem. The real problem is that C# and .Net doesn't encourage the right pattern for high performance systems.

The problem with C# is that sharing data is in the syntax of the language with lock and volatile keywords. Also the library is full with share data classes like ConcurrentBag, ConcurrentDictionary, ReaderWriterLock, ManualResetEvent and more.

Language that want to support high performance should prefer messaging over locks, golang has channels (which are like queues) and goroutines (which are cheap threads), erlang has actors, and C#? C# has BlockingCollection, only from .net 4.0, which is not enough.

First we need a way to create threads that are not really OS threads, we can do this with the various single thread TaskScheduler implementations (as NetMQ Poller is doing) but remember we want the support in the language.
The other parts is that we need a way to wait on a queue (without really blocking a thread) and on multiple queues.

Following is a suggestion:

Another important point is to make this extendable (which golang didn't do), so if I want to develop my custom channel (NetMQChannel for example) I can, following is a suggestion for receiving interface:

For more information take a look at libmill for C or golang channels.

Today when you want to create parameter-less lambda you have to use parenthesis, which is just boilerplate and verbose, so instead of this:

I want to do this:

Syntax is cleaner and less code to write.

In my opinion the exception usages in .net library is mostly wrong, if we actually want to write safe code almost every line of code need to be wrapped with try-catch. I much prefer the Try pattern, like with TryGetValue of dictionary.

However using the Try pattern is a little annoying, you need to remember to create a variable before calling the Try method, which is not how my brain works, when I get to the Try method I usually go up one line and declare the out variable. Also the variable is defined in an outer scope while you usually use it inside the if statement. My suggestion is to return multiple values, so instead of this:

We will write this:

The text variable is defined in the correct scope, we don't have to use the out keyword and wrote less code. I like this syntax better, although the pre-statement can look better, I'm leaving this to Microsoft.

Continuing the previous example, it would be much nicer if instead of checking the found boolean value we will do it like this:

The problem with writing a lot of enums, it is too verbose, you get a class with a lot of internal public enums, you don't know which method use which enum and you also have to think of the names for all those enums. So I would like to do it in method declaration:

Hopefully you get the point, I didn't make it bulletproof features yet, just suggestions and way of thinking. The bottom line is clearer code, less code, more safe, less bugs and built for performance.

You are probably not sure why I’m writing post about structures in the Advanced C# category. I hope that by the end of the post you will be sure, because structures have some interesting attributes in .net that worth understanding, especially when writing high performance and low level code in C#.

What does that mean? Let’s dive directly into an example:

Before showing you the result, let’s talk about some interesting points in this code, I didn’t initialize the n variable and didn’t get null reference exception, why is that? because when you create a structure variable it’s created on the stack, it’s not a pointer to memory on the heap. Now let’s take a look at the result: 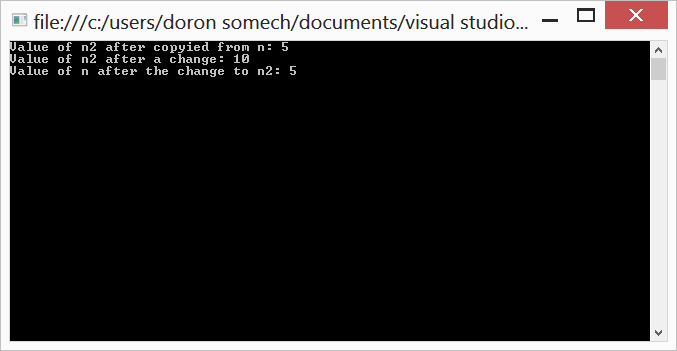 Strange? doing the same with classes would show 10 for both n and n2, but with structures n keep the original value. Why? because it’s value type, it’s not like a class that when you are doing assignment you just copy the reference, you copy the entire structure. n and n2 are two different location on memory, when the assignment happen it just copied all the memory from n to n2, when we changed n2 the n didn’t change.

So we know that every time we use assignment with structure we are actually coping memory, this copy thing can be a good for case when you want an object to have deep copy capability, instead of manual copy all the object and fields or using serialization solutions.

The rule for using structure for deep copy is that the structure will only hold primitives and other structures (which hold primitives), string will be copied as well but arrays won't be deep copeied.

Some example can be the memento pattern, which is a pattern when an object can go back to previous state, you can hold all the state of the object (which is a class) in a structure and when you start editing copy the structure to another field inside the class, when you want to rollback just copy the structure back to the main field.

What happened here? We got the memory location of the structure with line 4 & 5 (this trick is usually used with interop) then copied the memory to the byte array and released the pointer and handle.